Friends of Chemistry and Biochemistry

The Department of Chemistry and Biochemistry sincerely thanks those individuals who have provided support for our undergraduate and graduate programs. Contributions from alumni and friends are essential in supporting our teaching programs, research enterprises, lecture and event programs, improvements to facilities, overall development of the quality of our program, and, most importantly, our students. If you would like to become a part of our ongoing work, we invite you to join “Friends of Chemistry and Biochemistry”.

During the spring quarter of each year, the Department convenes a Faculty Awards Committee for the purpose of selecting our top students to be honored at an annual Departmental Awards Ceremony. This ceremony, presented by the Department Chair and attended by the MLPS Divisional Dean, recognizes our outstanding students and new graduates. The gifts and fellowships, many of which are named for our contibutors, presented during the ceremony are made possible entirely by "Friends of Chemistry and Biochemistry". 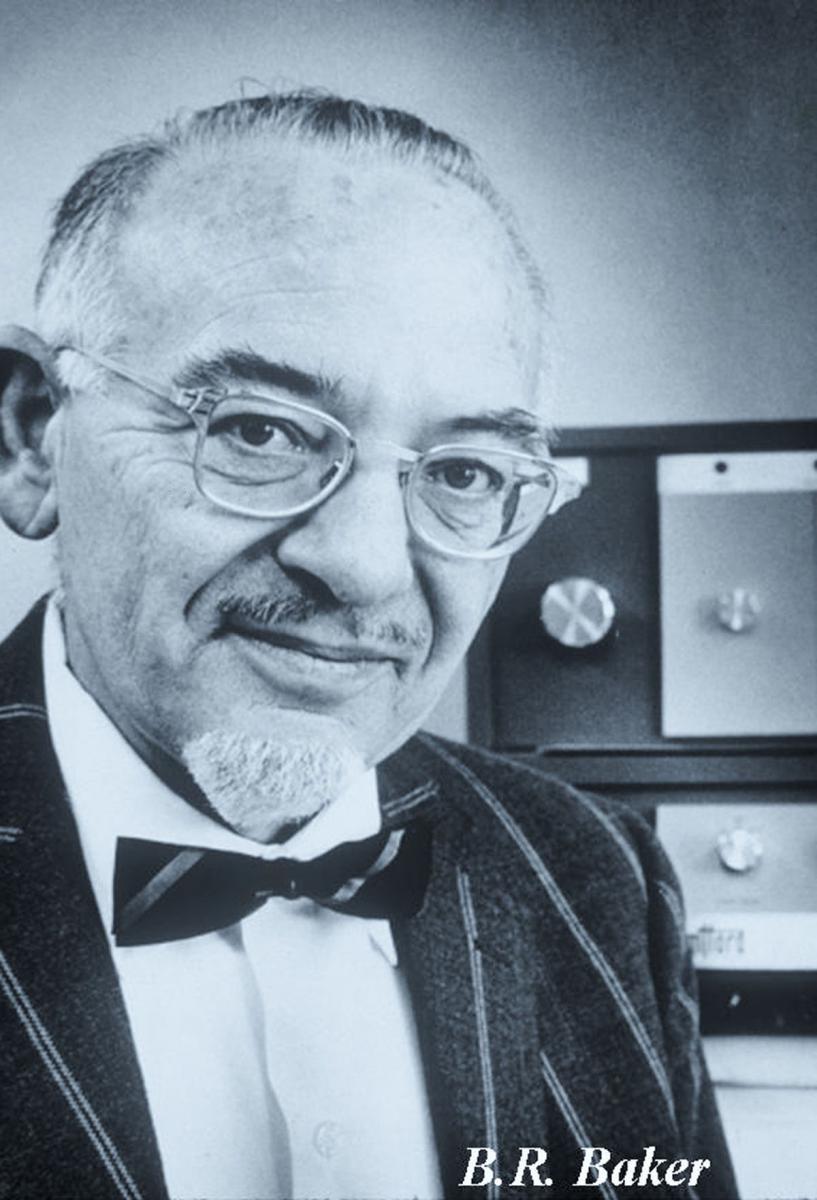 Professor B.R. Baker was a Professor of Chemistry at UCSB from 1966 until his death in 1971. Baker's graduate work on the structural elucidation and synthesis of Cannabis constituents marked the beginning of a prolific career in the chemistry of natural products. He undertook many diverse projects of medicinal interest including the synthesis of antihemorrhagic vitamin K analogues, biotin derivatives, compounds with hormone activity, sulfones with activity against tuberculosis, and alkaloids. He published two books and more than 370 papers that included a series of papers on the structure and synthesis of the antimalarial alkaloid from Hydrangea that filled an entire issue of the Journal of Organic Chemistry in 1952. He determined the structure of the first known nucleoside antibiotic, puromycin, and synthesized it in 1955. This achievement came long before the discovery of the structure of transfer ribonucleic acid (tRNA). Puromycin was later shown to mimic the structure of tRNA and became and an important tool of research in molecular biology. Puromycin was too toxic for cancer chemotherapy, but it aroused Bill's interest in this field. Few of the myriad of compounds that he had so meticulously synthesized showed any antitumor activity in vivo, so he sought a more rational approach to cancer chemotherapy. Perhaps his greatest contribution to medicinal chemistry was the concept of active-site-directed irreversible enzyme inhibition of substrate-identical enzymes. A monograph summarizing this approach to drug design promptly became one of the classic works in the field.

Bill's two great interests in life were his family and chemistry. He married Reba Brodsky in 1937 when he was a graduate student, and they were inseparable until the end. Their temperaments were strikingly similar; they were always cheerful, unpretentious, optimistic, and sanguine of outlook. Together with their three daughters, the Bakers were a tightly knit group whose pleasure in family life was communicated to their many friends.

Since founding the B.R. Baker Memorial Lecture and Student Fellowship in 1975, the memory of B.R. Baker has been actively kept alive by his devoted wife, Reba Baker.  On the evening of February 23, 2013, Reba Baker passed quietly in her sleep at age 95. Mother of Shari, Bonnie and Reenie, grandmother of Jeanne and Debbie, great grandmother of Win and Holt, and surrogate mother to thousands of foreign students whom she taught at UCSB from 1975 until her recent illness, her most precious connection was as wife and partner to her husband, Professor B.R. Baker.

The B. R. Baker Memorial Fellowship in Chemistry is awarded to a graduate student on the verge of graduation who has given strong indication that they will make continued and substantial contributions to the progress of organic, medicinal, or biological chemistry. Fellowship candidates are nominated by department faculty members and recipients are selected by a Department Faculty Awards Committee. Each fellow is honored at the annual B. R. Baker Memorial Lecture, and recipients receive a cash award of $500.

Donations to the B.R. Baker Memorial Fund may be made online at UC Santa Barbara Giving

Past Lecturers and Award Recipients (pdf) 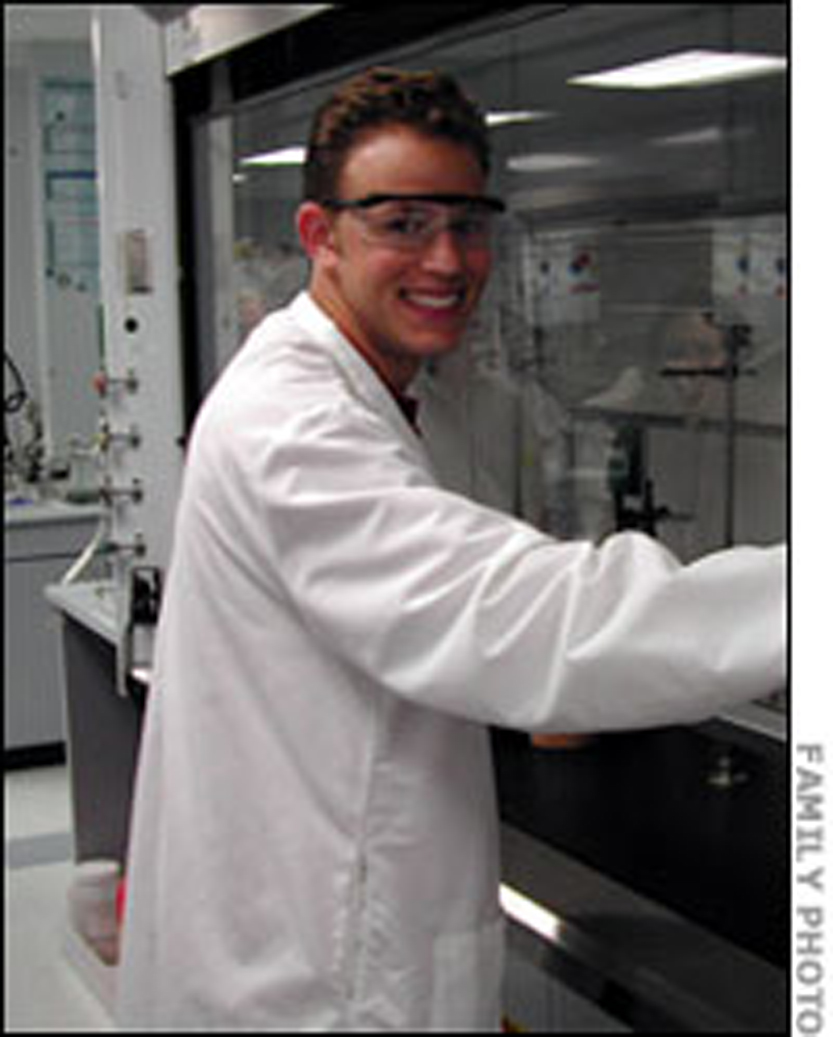 The Jarrod Davidson Memorial Scholarship is awarded annually to a graduate student who is studying chemistry at UCSB while facing special challenges raising a family. Honorees receive a cash award of $1000 to help ease the financial pressure of supporting a family while pursuing a graduate degree. This award is given to celebrate the memory of Jarrod Davidson, UCSB Chemistry PhD candidate from Fall 2003 through Spring 2004. Jarrod was pursuing his Ph.D. under the guidance of Dr. Tom Pettus when his life was tragically cut short in the summer of 2004. He was a loving single father to daughter Malia and a talented young organic chemist. To honor Jarrod's life and legacy, his family established the Jarrod Davidson Memorial Scholarship for the benefit of students embracing the challenging balance of family and graduate studies.

This fellowship honors former professor of Organic Chemistry, Robert H. DeWolfe. It was established by his wife, Barbara B. DeWolfe, in 1983 in memory of her late husband. The fund provides a stipend ($300- $3000) for undergraduate student(s) to conduct research in organic chemistry within the department during the summer months, for a period of no more than 12 weeks. Only interest accruing on the DeWolfe gift can be used. Applications are solicited once each year and the award(s) are made based upon need and recommendations from organic faculty.

This award is given in honor of former Professor of  Chemistry, Robert H. DeWolfe. The fund was established by his wife, Barbara B. DeWolfe, in 1983 in memory of her late husband and provides a stipend for teaching assistants who positively impact their undergraduate students. Nominations are solicited once each year from Department faculty and UCSB undergraduate students in all majors. Award recipients are selected by the Faculty Awards Committee based on nominations and quarterly teaching evaluations.

The DeWolfe Fund also supports the Honors Organic Chemistry Lab Program, in which outstanding undergraduates receive one-on-one guidance from a graduate student specializing in organic chemistry. Top graduate students are invited to participate in the program and are provided with a small stipend ($500 per undergraduate) at the conclusion of each mentorship term (10 weeks).

The Bruce Rickborn-Ross Johnson Endowed Graduate Fellowship Fund was established in 2007 through a generous gift of $500,000 from Dr. M. Ross Johnson, a 1970 Ph.D. Organic Chemistry alum of UC Santa Barbara, and honors his former Ph.D. advisor, Dr. Bruce Rickborn. Dr. Rickborn is widely recognized as one of the most important contributors to building the now world renowned reputation of the Department of Chemistry and Biochemistry at UC Santa Barbara.

Professor Bruce Rickborn received his B.A. from UC Riverside (Charter Student, 1956), and the Ph.D. degree from UCLA (1960), where he worked with Nobel Laureate Donald J. Cram. After two years on the Berkeley faculty, he transferred to Santa Barbara in 1962. Author or co-author of 90 research papers and one book, he points to his continuing warm relationships with over 30 Ph.D. students who obtained degrees under his direction as his most important contribution to science. He has been an A.P. Sloan Fellow, an NSF Senior Postdoctoral Fellow (MPI, Mulheim/Ruhr), and a Fulbright Senior Lecturer (U. Nacional, Bogota). In addition to teaching at all levels, he was drawn into administration in the turbulent times of the late 1960's, eventually serving as Dean of Letters & Science from 1973-1978, where he worked closely with Vice Chancellor Alec Alexander and Chancellor Vernon Cheadle. Dr. Rickborn served the campus and the University in several senate roles, including the Committee on Research and the Review of UC Administration of Weapons Labs, as well as serving on the Board of the Faculty Club for a number of years. Dr. Rickborn retired in 2001 after 39 years of service to the department of Chemistry at UC Santa Barbara. The establishment of the Bruce Rickborn-Ross Johnson Endowed Graduate Fellowship Fund at UC Santa Barbara is intended to honor and celebrate Dr. Rickborn and his tremendous impact on the department and its students, while enabling the department to attract top-notch graduate students. 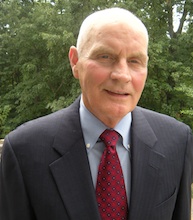 Dr. M. Ross Johnson received his B.S. Degree in Chemistry from the University of California at Berkeley (1967) and Ph.D. degree in Organic Chemistry from the University of California at Santa Barbara (1970). He is a named inventor on more than 100 U.S. Patents, co-author of more than 50 publications and chapters, and has over 100 invited and abstracted presentations covering drug therapies useful for a wide range of diseases.

Dr. Johnson is currently the CEO, President, and Co-Founder of Parion Sciences, Inc. and resides in Chapel Hill, North Carolina. He is an internationally recognized medicinal chemist with a long and productive career as an inventor, drug discoverer, executive and entrepreneur in the Pharmaceutical and Biotechnology industries. He became the 66th member inducted into the Medicinal Chemistry Hall of Fame in August 2011. From 1995-1999 he was President, Chief Executive Officer, and Chief Scientific Officer of Trimeris, Inc. (TRMS), a company he took public in 1997. Prior to that, Dr. Johnson was Vice President of Chemistry at Glaxco, Inc. (now GSK) where he was part of the original scientific founding team for Glaxco's research entry into the United States. Previous to GSK, Dr. Johnson served in key scientific and research management positions with Pfizer Central Research (PFE).

This prize was established by colleagues and students who wished to keep the memory of Willard L. McRary, Professor of Chemistry (1940-58), alive. Former Vice Chancellor Elmer R. Noble wrote: "...This is a fitting way to perpetuate his memory and to further his interests in chemistry through encouragement of students."

Known as the most prestigious undergraduate award in the Department, the Willard L. McRary Prize is awarded to a graduating senior whose attainment in chemistry is outstanding and reflects promise of the same high-quality scientific achievement that characterized the career of Professor McRary. Each year since 1962, the Department has undertaken a process to identify the most stellar undergraduate students in Chemistry. At a minimum each student who has been honored with this award has achieved an overall 3.4 GPA and a 3.6 GPA in the Department. Chemistry professors and the senior undergraduate advisor(s) make recommendations for this award. Awardees' names are added to our bronze McRary Memorial Award Plaque in the foyer of Chemistry Administration Building 232.

This award and its associated funding is supported by an endowment established by Dr. and Mrs. S. S. Tokuyama, initially in 1970 and revised in 1991, to memorialize their son John H. Tokuyama. No application process is required. Following the wishes of the donors, the award has been used in support of graduate students in organic chemistry. The John H. Tokuyama Memorial Fellow is selected from the pool of organic graduate students making good progress towards the degree, with an effort to address financial need. The funding is variable, based upon the annual income from the endowment and longer term considerations.